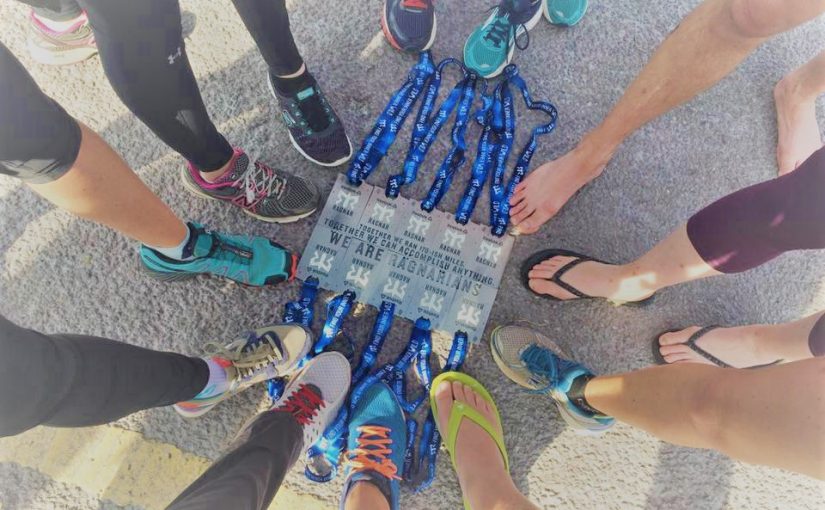 Well, team, what can I say?

We ran, we walked, and (in one notable case), we crawled, 170 odd miles from Maidstone to Brighton. We have laughed, cried (although that was probably just me – I forgot to bring any medication with me for the weekend) and created memories that will genuinely last a lifetime.

I’m not often lost for words, but I am struggling to articulate how proud I am of all of us for making it to the end with our senses of humour intact, with two unblemished minibuses, and – most important of all – so many bloody t-shirts and medals! There were undoubtedly challenges along the way, but we all finished with smiles on our faces and that has made me a very happy man this morning.

I’m sure we’ll all take different things from this, but I wanted to share some of my favourite memories as a way of showing how much I appreciate what each and every one of you achieved this weekend.

Beccy – you were my first proper friend, so it seems right that you were runner number one – the first name on my list when I started thinking about the ‘serious’ runners I knew, and the first person to commit. I love you, but I have no idea how your family cope with you! Seeing you bouncing around was a highlight of every major exchange except the last one, where, fittingly, you were asleep in the bus. Your energy and enthusiasm lifted me every time I saw you and reminded me in the middle of the night as you set off for your third leg, and second run in darkness after a difficult first one, that this was supposed to be fun.

Jo – your ‘we’ve already got two strikes and it’s only lunchtime on Saturday’ text was NOT FUNNY AT ALL – but I’ll let you off. Your determination to not just run your bit, but also support and run with other members of the team, inspired our bus to grit our teeth and get out there when the going got tough. Thank you for sharing your very particular knowledge of car park activities with the rest of the team, for hosting the social in such a generous way, and for keeping Beccy in line and on time, not just over the last two days, but the last six months of preparation, and arguably the last several years of her life!

Niki – your inspiration, support and encouragement when I first started running in 2012 was one of the reasons I stuck at it (admittedly after a couple of false starts), and therefore one of the reasons I was able to have an experience like this. I’m so glad you were able to be part of it too.

And that brings me nicely to Richard. Mate – we didn’t know each other before this, and as I wasn’t quite sure why anyone would want to ‘volunteer’ for this job I wasn’t quite sure what to expect! The moment you turned up at the social with notebook and pen in hand though, I knew we were onto a winner. Especially as I’d forgotten to bring mine, complete with all the useful notes I made at the team captains meeting. I said yesterday – thank you seems so inadequate to show how much I appreciate what you did for us over the weekend. It would have been such a different experience without you, and I hope you know how grateful we all are to have had you on the team.

And so to runner number 4 – Rachel. In my head, and even over the weekend, you were the ‘sensible’ one of the Matthews sisters (I mean everything’s relative, right?!). It wasn’t until last night, when I finally gave in and went to bed at about half nine, that I fully appreciated that you were still at least two hours from home, and that unlike me, you had to get up and go to work today. Therefore I can now safely say that you’re both as crazy as each other. Having the old ‘laps round mum’s garden’ crew back together for this seemed strangely fitting. Let’s not leave it another twelve years before we’re back in touch.

Andy. Bloody hell, Andy. Have you really only been part of this team since the 13th of August?! We could have picked up any old muppet from that Facebook post on the parkrun page, and not a day has gone by when I haven’t thanked my lucky stars that you posted first. The Southcliff Hotel will live long in my memory for so many reasons – the delightful interior décor, the stellar customer service, and the luxurious bathroom – but primarily because it was just amazing to feel clean and warm again. I know that I’m speaking for everyone when I say thank you for all you did for the team – not just the showers, but the t-shirts, the knowledgeability of the race bible(!), your willingness to get stuck in and get on with it, and for being first at the bar on Friday night.

Now, bus 2… The only place to start is Charlie. Charlie, who, in her own words, doesn’t like running and has ‘the core strength of a grape’. Charlie, who actually trained for this, for the first time in her life. Charlie, who actually signed up before Dave. Charlie, who in a never-before-seen fit of organisation, started packing for this event nearly a whole week before she needed to leave.  Charlie, who took all our jibes about her legs being ‘twice round the bus and back in again’ in good spirit, and then stuck two metaphorical fingers up at us all by running to the top of Beachy Head at the end of her final leg. Charlie, whose genuine joy at the sight of a dead rat while we trekked for what felt like miles trying to find the hotel in Folkestone reminded me – just in time – that this experience was not about everything going perfectly to plan, but about the little things that happened along the way.

You know when I sent that questionnaire round, asking people to assess each of the potential run slots, and indicate whether they were in their comfort zone, a bit of a stretch, or a step too far? I knew I’d filled the ‘slot of death’ when Naomi didn’t even bother answering the question for the shorter legs. I was told you were hardcore, Naomi, but my word, you proved it. Your willingness to climb out of a bus on Beachy Head after less than an hour of sleep, feeling sore from the earlier legs, and set off across the Seven Sisters in the sunshine with a smile on your face is a feat of quiet determination that I will never forget. It motivated me to run faster along Seaford seafront than I ever have before (according to Strava) and it will inspire me on many a future running adventure.

And while we’re talking about quiet determination, let’s talk about Tracey. Tracey – I know you were nervous about the night run. After hearing from Andy about how poor the signage had been for the others, we were all feeling anxious about what we would find, and you had your reasons for being more anxious than most. I wouldn’t have blamed you at all for opting to skip your leg, and having talked about the various options for one of us to pace you, I was utterly amazed to find you standing alone at the handover point waiting for me. You overcoming your doubts to finish that leg – with all its ridiculous challenges (including, for anyone who didn’t hear, 1.5 miles of running on a shingle beach,  right on the water line, in pitch darkness) is one of the things that I feel proudest of from this whole experience. You’re made of very strong stuff, Tracey Harwood.

Right from the start, I knew that on this event, I wanted to have someone on the team who I could completely rely on to help me sort things out if the shit hit the fan. The name at the top of that list was Patrick Galpin. I tried to convince him to run, knowing that it was a longshot – but he left the door open by offering to help in some other way… Aside from his excellent driving/parking skills, my instincts were vindicated when at exchange 19, at about 4am, when all of our brains were starting to feel addled through lack of sleep, I met Charlie, who had an expression on her face that was approaching awe. She told me Tracey had called, that her route was very poorly signed, and that she was lost, but that Patrick had (and I quote) ‘just been amazing. Stayed completely calm, and started sorting it.’ I look round, and there’s Patrick, standing in hi-vis, talking to a group of runners who had just finished the leg, with Tracey on the phone, advising her (and the other runners who were also lost) how to get to the exchange – while also urging them not to take unnecessary risks and just to stay safe. I wasn’t shocked, because this is why I wanted you on the team so much Patrick. When stuff like this happens, there’s nobody else in the world that I’d rather have around.

David. I know you’re not comfortable with public displays of sibling affection, so fuck off, pooface.

I’ve waffled enough, and I don’t want to completely embarrass myself – so it’s nearly over, I promise.

Thank you, all of you (even Dave), for being crazy enough to sign up, and for having the sheer bloody minded determination to make it to the end. I hope that you’re all very proud of what we achieved together. I also hope you had as much fun as I did – I laughed so much this weekend that my stomach muscles are sorer than my legs today.

You all helped to make this experience one of the things that I will be proudest of when I look back on my life. Big love.

Now, is it too early to start talking about next year?