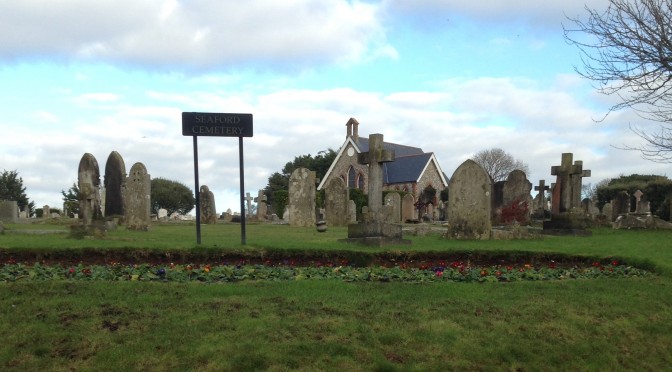 Today is Tuesday December 30th, and I’m sitting on a bench in Seaford cemetery, where my dad is buried.

(Yes, this is a post about a cemetery. I’m not going to apologise for it, because it felt right at the time. It’s a bit deep, but not quite as depressing as you might think. That said, if today’s not a good day, maybe skip it and come back later.)

I don’t like cemeteries. That probably goes without saying. I’m pretty sure than no sane and reasoned individual would consider them a good place for a day out. Seaford cemetery, even if it wasn’t a cemetery, wouldn’t be a great place to spend an hour on a December afternoon. It’s a series of grass squares on a relatively exposed (and therefore somewhat bleak) hillside. It’s bordered on one side by an industrial estate and on the other by housing. It’s a stone’s throw from the local council rubbish tip. You might think that would be undesirable, but I like to think dad would see its proximity to the dump as an unexpected bonus.

This used to be somewhere I would come to cry. I thought that was what you did at graves. You brought flowers and a jay cloth, did a bit of tidying up, wiped bird poo off the headstone and then sniffed a bit. For the most part we were a stiff upper lip sort of a family. You didn’t really acknowledge that life was a bit shit, you kept calm and carried on (and sought counselling for it later in secret – that’s another story for another time). But this was somewhere it was acceptable to show emotion, and I did so readily.

In my early twenties I went through a stage of not really knowing what it was there for. Although I would sometimes talk to dad while I was there, there were places where that conversation came more naturally and felt more appropriate. In the garden at home, out walking on the South Downs, or anywhere there were caravans, steam trains, or steam engines. His grave became a focus for grief, rather than memory, and once I had got to the stage of wanting to move on it didn’t feel right to spend time there. Equally though, it didn’t feel right to stay away.

At some point, and – at least initially – not consciously, I got into the habit of an annual visit. The cemetery is about a 30 minute walk from my mum’s house, and if you know where to go you can do most of it on country lanes and farm tracks. The annual ritual, usually performed in December, was to walk up to the cemetery, stand at dad’s grave for a bit, then go for a walk round and check on some of the other familiar names in there. Relatives of friends, or other people on the periphery of my life. I’d imagine other people walk round such places in the towns where they grew up and can find other family members, however distant. That’s not the case for me, my family are somewhat nomadic, and I’m not sure if the ‘other people’s graves’ thing is a subconscious substitute, or just morbid curiosity.

In any case, over time the ritual changed how I felt about remembrance and memorial. During the couple of hours I was walking to or from this bleak hillside I could immerse myself in the memories – good and bad, and it was these walks that helped me process a lot of what had happened. I didn’t allow myself to dwell on it at other times, but on those trips I could indulge any morose tendencies I had been harbouring. On one of those trips I came to the crucial realisation that by the time dad died, I had already grieved for him, alleviating years of guilt that I had felt about my emotional response (or relative lack thereof) in the aftermath of his death.

I still perform the ritual. Not quite annually, but when I can. This cemetery now for me is a place where I confront my own mortality, rather than mourn that of other people. As I walk past headstones I find myself imagining the lives of those they commemorate. Lives cut short, or long and hopefully happy lives that end the way that, perhaps, we all aspire to.

I don’t want to be buried. Assuming when the time comes I am fortunate enough to have people around who want to remember me, I don’t want that act to be confined to a single place where the only socially acceptable emotion is one of sadness. I want people to remember me in the places we were happy together, in the activities I enjoyed, or with the people I was close to. If something must be done with my earthly remains after I have gone on to whatever the next awfully big adventure is, I would like them to be spread across as many of my favourite places as those left behind can manage.

If I’m lucky, that moment is a long way in the future, and I’ll have time to not only leave them a list, but make sure it’s inconveniently lengthy.