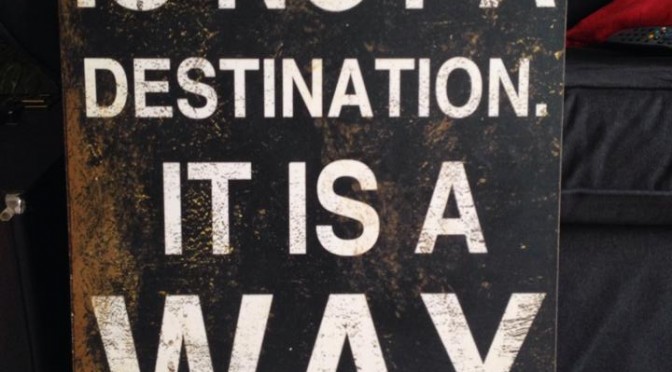 I don’t like internet memes as a general rule.

My default position is that if you need a hashtag or inspirational graphic to tell you how to live a better life, you’re doing something wrong. Even if it involves an air-punching baby.

And then I tried #100happydays.

Right from day one, I was curious. Would I make it to the end? Apparently 71% of those who start don’t cross the finish line. How would it feel? What would be different? The official website of the movement makes all sorts of ambitious claims about people noticing what makes them happy, being in a better mood every day, getting compliments from others, realising how lucky they are to have the life that they have, being more optimistic, and even falling in love during the challenge.

From about day 60, I started getting nervous. What if, when it all ended, I stopped being happy? What should I do next? Should I just carry on indefinitely spamming people’s social media with pictures of my ride to work, of my mum eating chips, of me on the beach or all of the other stuff that’s made me smile over the last few months?

I’ve looked back at those ambitious claims.

But other than that, every last one of those things has come true.

And it doesn’t stop there. 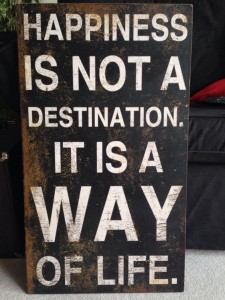 I finally understand that saying about happiness being a journey and not a destination. That it’s fine, even essential, to have goals and targets to work towards that will give long term gratification. But that it’s just as important to appreciate the things you already have – particularly the little things that are sometimes hard to notice. And that the days when nothing feels good about the world are when it’s most important of all to find or create something that makes you feel glad to be alive.

So where do I go from here?

I dabbled with the idea of extending the challenge (#wholeyearofhappy crossed my mind) but decided against for two reasons. Firstly I’m going abroad on holiday in a few months and the mobile data roaming charges would’ve been horrendous. But more importantly, at some point I’d either have to stop on my own terms, or fail. I don’t want it to end like that, so it makes sense to stop here, after 100 days, where I’d originally intended it would.

That doesn’t mean it’s over. What I’ve learned over the last 2400 hours will, I hope, stay with me for the rest of my life. I’m considering making it an annual event.

A number of people started this challenge with me. None of them made it to the end. I’ve wondered why. Maybe I’ve been lucky. Maybe my 100 days were easy. I’m physically and mentally healthy. Nobody I love died, had an accident or got ill. I’ve still got a job, and somewhere nice to live. Maybe if I’d had to deal with some of those sort of challenges along the way, I wouldn’t have got this far. Who knows. What I did learn is that there are days when it takes more effort to be happy than not. But that doesn’t mean you shouldn’t try.

So if you’re one of the people who’s been playing along, or quite fancies having a go but doesn’t think they can make it, my challenge to you is to go for it.

You never know where you’ll end up. 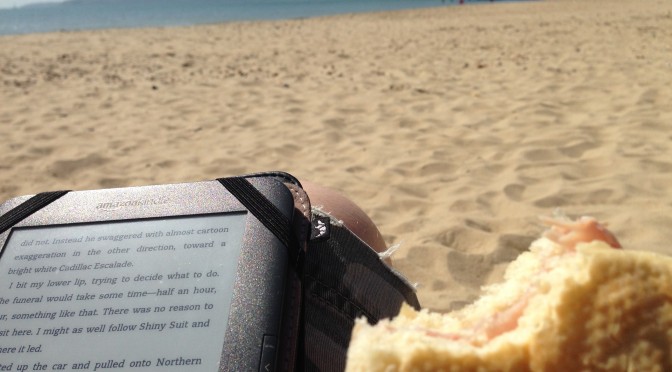 On Mother’s Day this year, I realised I was a bit down in the dumps.

I wasn’t depressed. I know enough about depression to not use that sort of language lightly. But a lingering, low level negativity had crept up on me in the cold, dark, and seriously wet days of early January, and hung around like a bad smell in a seemingly clean fridge.

It took me a while to notice, but I was gradually turning into a miserable git.

When, at the end of March, the clocks changed and the sun came out after what felt like three months of constant rain, it was like I’d suddenly taken a breath of fresh air after weeks indoors (actually, given the biblical flooding that we’d all had to put up with, that probably wasn’t far from the truth). By way of an explanation for my apathetic malaise, all I could come up with was this:

I’m slightly embarrassed to admit it now, because there are people in the world who have real problems, but that’s it.

Yes – I am a lucky bastard.

Clearly all I needed was to give myself a kick up the arse and start appreciating all the positive things in my life.

I’d been aware of the ‘100 Happy Days’ challenge for a while. When I first saw it I dismissed it as another one of those cheesy internet memes that life’s too short for. Various friends had spammed me on Facebook with pictures of lego/animals/their children (delete as applicable) accompanied with the hashtag, but to be honest, I didn’t really buy it and most of them didn’t make it past the first week.

The idea is cheesy, but simple. Every day, you take a picture of something that makes you happy, and post it somewhere online. I guess the posting is somewhat optional, but it beats adding to the mountainous sludge of twaddle that normally works its way round the interweb.

The website 100happydays.com made some rather ambitious promises – and I was pretty sceptical, but hell, it was that or continue to wallow  in my very middle class, first-world ‘non-problems’.

I started on Mother’s Day, with the humble beginnings of a cup of tea in the park on a sunny day. And before anybody scoffs at how easily pleased I am – showing off is verboten, OK?

Today is day 32. I’m posting my pictures on Facebook for the people I actually know (Facebook is sacred – more on that later), and on Twitter for the benefit of the general public/whatever sinister monitoring the official 100happydays people do.

And unbelievably, it has completely changed my state of mind.

The first few days were really, really hard, and I completely understand now why so few people make it through the first week. On the second day I was so stuck I had to use the album cover from a Proclaimers song that I’d listened to on the walk to work. Now it’s a cracking song, but I’d hoped my life was a bit better than a twenty year old song nobody’s ever heard of by a band most people don’t like.

But – and this is the thing – the fact that it’s not easy to start with is entirely the point. Too often, we bounce from major event to major event, without realising that the tiny little things that fill the gaps in between are what life is really all about.

Rather then spending every spare ounce of mental energy trying to work out what I need to do to have the amazing life I’d envisaged myself with, I spend it thinking about what has already made me happy today, and how I might represent it in photographic form (unless it’s a cake, in which case that’s easy).

If I get home from work and I still really can’t think of anything, I make sure I do something in the evening that I can use. Which, obviously, means doing something that will make me happy. A bike ride, a walk on the beach, a phone call. Whatever.

After the first week I realised I was – weirdly – starting to plan my happy thoughts in advance.  I hadn’t originally understood what the website meant about ‘having time to be happy’  – but that’s just it; sometimes the universe doesn’t present much, so you have to create something.

I notice everything that makes me smile – because I’m instantly making an assessment of whether I should take a photo of it. Seeing a moving ferry on my way to work (yes really. Stop it). Smelling the sea while out walking on my lunch hour. I nearly used a random small child who started a conversation with me the other day, but I figured taking photos of children you don’t know is probably not the done thing.

I was about to write that nobody else had yet noticed the change in my outlook, but that’s not strictly true. Four different people have so far asked me about it. Three of them are now having a go themselves. One in particular sent me a note about how nice it was to see some positivity on Facebook, which made my day. In fact, it nearly was my happy thought for the day. But that would have caused some kind of tear in the space/time continuum, and I don’t watch Doctor Who, so I have no idea what I’m talking about.

There are 68 days left. Judging by the way it’s gone so far, by early July people will think I’m on drugs. I’ll have to go and get a job at Disneyland or something, just to blend in.